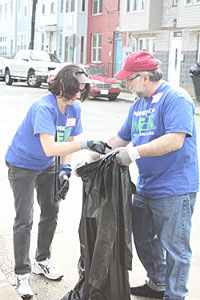 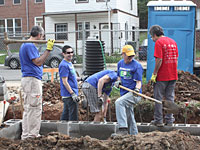 OCC employees Ammar Askari (left), Juan Marroquin (second from left), and David Permut (fourth from left) work with two other volunteers on the foundation of a home during a recent NeighborWorks Week event in Washington, D.C. 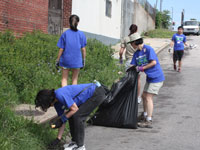 Volunteers help clear debris as part of the street-to-street cleanup of the Ivy City neighborhood of Washington, D.C. 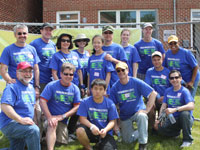 OCC volunteers take a break from cleaning up to gather outside the new Bexhill condominiums, which were developed by Manna, a NeighborWorks affiliate in Washington, D.C.