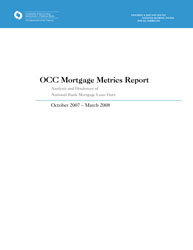 Recognizing the need for more granular data to assess the state of troubled mortgage markets, the OCC began in February to require the nine largest national bank mortgage servicers to submit comprehensive mortgage data on a monthly basis. The report analyzes data submitted on each of the more than 23 million loans held or serviced by these nine banks from October 2007 through March 2008. The $3.8 trillion portfolio represents 90 percent of mortgages held by national banks and about 40 percent of mortgages overall. The participating national banks are Bank of America, Citibank, First Horizon, HSBC, JPMorgan Chase, National City, USBank, Wachovia, and Wells Fargo.

The new OCC report improves upon other reports on the mortgage industry in three ways. First, its metrics are comprehensive, covering servicers and holders of mortgages and all mortgages, not just subprime. Second, the report is based on loan-level data rather than surveys that report aggregate or summary information submitted quarterly or less frequently. The loan-level data provides greater detail and reliability over time. Third, the agency established standardized definitions and data elements to ensure that information is reported consistently from bank to bank and from loan to loan.

"We are hopeful that the standard definitions and methodology used in this report will be applied more broadly across the U.S. mortgage market," the Comptroller said. "The more we can use standardized metrics across the board, the better we can measure, monitor, and manage mortgage risk."

Although this initial data set was provided on a "best-efforts" basis and includes some "noise" in the data, the OCC is working with the banks to validate the accuracy and fill gaps in the data gathered. The Comptroller also noted that some of the conclusions in the report may seem different from conclusions reported elsewhere, but with good reason. "The data in this report is more precise since it is on an individual loan basis; the population of mortgages held and serviced by these banks has some characteristics different than the overall population of mortgages; and the standard data elements and definitions in the report will also lead to differences in reported results."