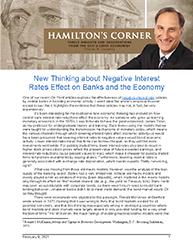 One of our recent On Point articles explores the effectiveness of negative interest rate policies by central banks in boosting economic activity. I won’t steal the article’s empirical thunder except to say that it highlights the evidence that these policies may not, in fact, be very expansionary.

It’s been interesting for me to observe how economic thinking has evolved on how central bank interest rate reductions affect the economy. As someone who grew up learning monetary economics in the 1970s, I was fortunate to have the great economist, James Tobin, as my professor for undergraduate money and banking. Back then—using the models that we were taught for understanding the transmission mechanisms of monetary policy, which means the various channels through which lowering interest rates affect economic activity—it would have been presumed that lowering interest rates to negative values would boost economic activity. Lower interest rates mean that firms can borrow cheaper, so they will find more investments worthwhile. For publicly traded firms, lower interest rates also tend to result in higher stock prices (stock prices reflect the present value of future expected earnings, and interest rate reductions cause present values to rise), which make it cheaper for publicly traded firms to fund new investments by issuing shares. Furthermore, lowering interest rates is generally associated with exchange rate depreciation, which boosts exports. Pretty convincing, right?

What was missing from those old macro models, however, was the analysis of the loan supply of the banking sector. Banks had a very limited role in those old macro models and mainly played a role as creators of money (bank deposits), which mattered in the macro models only through its effect on “the” market interest rate (e.g., the yield on Treasury bills). Bank credit was seen as substitutable with corporate bonds, so there wasn’t much need to model bank lending behavior—whatever banks didn’t do to meet credit demand, the bond market would. Or so they thought.

There were economists who objected to this paradigm. Ronald McKinnon at Stanford wrote a book in 1973 claiming that it was wrong to think that bond markets existed for all potential borrowers, and that this thinking was especially wrong in developing countries where bond markets and stock markets were largely absent or only provided funding for a very small fraction of firms.1 For McKinnon, the major failings of existing macroeconomic models were that they failed to consider (a) how economic policies, including central bank actions, affected banks’ lending decisions, and (b) that some borrowers could only borrow from banks. McKinnon, in particular, disagreed with Tobin’s view that raising inflation would spur growth (the so-called Tobin effect), and argued instead that because banks did not earn interest on reserves held at central banks (at that time) higher inflation would cause losses to banks and thereby raise the cost of lending, which would depress the economy.

I first took McKinnon’s classes as a PhD student in the early 1980s, and the experience was quite a shock because the thinking was so different from the models we had learned in Tobin’s class, or other macroeconomics classes at Yale. Interestingly, in the 1980s and 1990s, a torrent of academic work on banking was produced that supported the McKinnon worldview. This work consisted of theoretical contributions that explained why some borrowers can only borrow from banks and empirical studies that showed that bank credit supply was a major influence on macroeconomic fluctuations. The new literature produced a dramatic change in macroeconomic thinking: the neglect of bank loan supply was not just worthy of an academic footnote; it was fundamental to understanding how shocks to the financial sector produced economic fluctuations.

Over the past two decades, this new literature emphasizing the macroeconomic importance of bank credit supply has had a major effect on the way economists think about monetary policy, and this has particular relevance for thinking about negative interest rate policies.

In theory, negative interest rate policies should harm banks, and the harm caused to banks should reduce the supply of bank credit. The reason for the harm is simple: banks have invested large amounts of resources to construct branch networks that provide convenience to depositors, and in return, banks pay interest rates on retail deposits that are below the wholesale interest rates that are set by monetary policy. A successful traditional depository bank made investments in a brick-and-mortar branching network to earn profit through a wider net interest margin (NIM), largely because of the interest saving on deposits.

This decline in earnings shows up as a decline in the value of the bank (as I found in a paper with Doron Nissim) and a decline in the bank’s ability to supply credit (as shown in a paper by Itamar Drechsler, Alexi Savov, and Philipp Schnabl).2 The supply of credit depends crucially on the cost of funding, and on the ability of the bank to absorb risk. When the NIM shrinks, the cost of funding loans goes up, and bank equity capital (the economic value of its shock absorption capability) shrinks; both contribute to a contraction in bank loan supply.

Because many borrowers—consumers and small firms—depend on bank credit as their only source of funds, that contraction has a negative effect on economic activity. It is conceivable that this negative effect may be larger than the positive effects that come from reduced mortgage rates (which spur home buying) or depreciated exchange rates (which spur exports) or increased stock prices (which reduce large, publicly traded corporations’ funding costs).

This logic provides the core of the economic explanation for why negative interest rate policies have not delivered much in the way of economic expansion. It also points to another feature of negative interest rate policies: their consequences for the distribution of economic opportunity and wealth. For large, publicly traded firms, high stock prices mean that they can invest and grow, but for small, private firms, the lack of bank credit supply means that they cannot invest and grow. Similarly, for wealthy consumers, falling interest rates mean that their stock portfolios rise, their mortgage costs fall, and they are richer. But many low- and moderate-income consumers who hold much of their limited wealth in bank accounts find that they are poorer.

Negative interest rates have persisted now for several years in some countries. This has allowed us to see evidence that leads us to question the presumption that negative interest rates are helpful for growth. And we know that they have had adverse consequences for small firms and for wealth distribution. It will be interesting to see in the years ahead how central bankers respond to these facts.