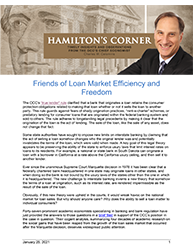 The OCC’s “true lender” rule clarified that a bank that originates a loan retains the consumer protection obligations related to making that loan whether or not it sells the loan to another party. This rule guards against fears of shady origination practices, “rent-a-charter” schemes, or predatory lending for consumer loans that are originated within the federal banking system and sold to others. The rule adheres to longstanding legal precedents by making it clear that the origination of the loan is the act of lending. The sale of the loan, like the sale of any asset, does not change that fact.

Some state authorities have sought to impose new limits on interstate banking by claiming that the act of selling a loan somehow changes who the original lender was and potentially invalidates the terms of the loan, which were valid when made. A key goal of this legal theory appears to be preserving the ability of the state to enforce usury laws that limit interest rates on loans to its residents. For example, a national or state bank in South Dakota can originate a loan with a borrower in California at a rate above the California usury ceiling, and then sell it to another lender.

Ever since the unanimous Supreme Court Marquette decision in 1978 it has been clear that a federally chartered bank headquartered in one state may originate loans in other states, and when doing so the bank is not bound by the usury laws of the states other than the one in which it is headquartered. The new challenge to interstate banking invents a new theory that somehow the terms of a loan at origination, such as its interest rate, are rendered impermissible as the result of the sale of the loan.

Obviously, if this new theory were upheld in the courts, it would wreak havoc on the national market for loan sales. But why should anyone care? Why does the ability to sell a loan matter to individual consumers?

Forty-seven prominent academic economists specializing in banking and bank regulation have just provided the answers to those questions in a brief filed in support of the OCC’s position in the case in question. Their cogent analysis, summarizing four decades of academic research on the social gains that have been reaped from the growth of the loan sales market that occurred after the Marquette decision, deserves widespread public attention.

So, let’s examine their argument in detail (all quotations below are excerpts from the brief). The central insight of the brief is that the competitive abilities to originate loans and to hold loans can differ. One bank may be positioned well to originate a particular loan while a different bank may be better positioned to hold it. The divergence of comparative advantage in origination and holding loans reflects “diverse regulatory frameworks, information processing capabilities and access to capital.”

“Therefore, a bank’s pool of local loanable funds will not necessarily always match the loan demand generated by the supply of local investable projects. Some markets will have an oversupply of good borrowers that cannot be funded by banks, while other markets will have an excess of funds due to the lack of good borrowers. The ability to transfer loans between institutions improves efficiency and production in both types of markets, by allowing funds to flow across space. Local institutions can exploit local information to make good origination decisions, whereas other institutions having excess local funds are able to hold more good loans than they would otherwise be able to make to (their) local borrowers.”

Why does preserving efficiency in the loan market matter? “Economists have found that a well-functioning secondary market for loans has three benefits and these benefits would be mitigated if loan sales are restricted. First, loan sales expand the supply of credit by giving originating banks the opportunity to finance loans less expensively. The expansion of the banking system’s aggregate lending capacity and the allocation of capital to the most productive projects regardless of location have important macroeconomic implications, such as greater economic growth.”

“Second, loan sales reduce the risk of lending amongst banks by allowing greater diversification of lending portfolios. By buying loans from around the country, banks can reduce their exposure to the geography-specific risk in their immediate area. Banking system risk can also be reduced by sharing it with non-bank buyers of loans.”

“Third, the expansion of lending and lowering of risk made possible by loan sales should lead to more financial inclusion and broader access to credit. Studies have shown that loan sales reduce the interest rates that borrowers pay on their loans and increase the likelihood that borrowers will receive a loan. These advantages should, in theory, be especially important for small and risky borrowers, who are often excluded from receiving loans when credit is constrained. Such financial inclusion has been highlighted as important for economic growth and a more equal distribution of wealth and income. Moreover, many innovative new (“fintech”) lenders rely on loan sales as a means of leveraging their origination capabilities, which can carry particular benefits for less wealthy or higher-risk borrowers. Encouraging loan sales will allow innovative new lenders to originate loans on a larger scale. Limits on the viability of the loan sales market would therefore have adverse effects on the underserved by limiting their ability to receive lower cost loans as well as receive funds through innovative financial inclusion intermediaries.”

In other words, if the market for loan sales disappeared, credit supply would be reduced, and banks would become riskier, leading banks to charge more for all loans. Furthermore, the borrowers who would be hardest hit by this change would be those at the lowest rungs of the credit ladder, the “small and risky borrowers,” because loan sales are playing a particularly important role in expanding financial inclusion, particularly for new fintech lenders.

The brief points out that interstate loan sales are not a sideshow in our financial system. “The benefits of loan sales are clearly indicated by the fact that loan sales constitute a central component of the banking business. And while some loan sales would remain legal regardless of the court’s ruling, the activity and depth of the secondary loan market would be limited if the court required that sold loans conform to the usury laws of the purchaser’s state.”

So, the benefits of interstate loan sales to consumers, especially the most vulnerable borrowers, are substantial. But shouldn’t we worry that allowing loan sales across state lines undermines the effectiveness of usury laws? Doesn’t that aspect of loan sales harm consumers? The brief, and the research it references, shows that more than four decades of research on this question provide a clear answer: no.

“The academic literature on the relative benefits and costs of maintaining usury rates provides a useful context for the decision. Usury rates attempt to restrict any potential market power that banks can use to disadvantage borrowers. However, usury ceilings also could differentially curtail loans to riskier and lower-quality borrowers, thus pushing them towards less-regulated types of borrowing. Empirical research quite broadly supports the notion that the latter effect dominates: that riskier-looking borrowers (who are often minorities or others with limited financial access) are hurt when usury ceilings are binding and benefited when they are loosened or eliminated. Interpreting the National Bank Act in a way that, contrary to the statutory scheme and the OCC’s interpretation, allows usury laws from states not connected to the original loan transaction to frustrate loan sales, therefore, is likely to reduce the economic advantages of the secondary loan market in ways that adversely affect income and wealth distribution within the economy.”

Rarely does economic analysis provide such a clear, unambiguous conclusion. But in this case, scores of academic studies over many years have reached the same conclusion. Well-intentioned advocates of limiting the interstate loan sales market in the interest of helping the poor need to read this brief and the studies it cites.

There is a broader point that also deserves emphasizing, which the authors of the brief did not make. The federal banking system was created in part to guarantee that Americans can participate in a national credit market by virtue of their status as American citizens. By maintaining a federal banking system, we ensure that citizens have the economic freedom to enter into contracts with federally chartered banks if they wish to do so. That economic freedom, like many other economic freedoms, has significant benefits, which are not always apparent to non-specialists, and so the point is worth emphasizing: Freedom matters for the public good, and economic freedom should be understood and defended as a core human right alongside the freedoms of expression, worship, privacy, due process, and self-defense. The federal banking system is not just a collection of banks, it is and always has been a source of economic freedom that empowers individuals and in doing so keeps our financial system, economy, and nation strong.