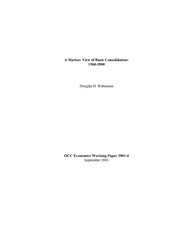 This paper presents an empirical investigation of the consolidation process among banking organizations over the past 40 years. As merger announcements in the news make clear, consolidation is a continuing saga. While consolidation has been the dominant characteristic of the banking industry for decades, tests show that consolidation has not been a stable process. These tests indicate that nine different episodes, ranging in duration from one year to 11 years, describe the bank consolidation process since 1960. Closer examination of the episodes reveals that consolidation slowed after the early 1980s for banks with less than $2.7 billion in assets, but accelerated and was operating at its fastest pace between 1994 and 2000 for banks with more than $2.7 billion in assets. Furthermore, in the 1994-2000 episode, the largest banks, those with assets greater than $24.3 billion were most likely to exit the industry while the smallest banks, those with assets of less than $100 million, were least likely to exit the industry. Transition probabilities from the most recent consolidation episode provide a plausible estimate of what the banking industry's structure will look like in the future.