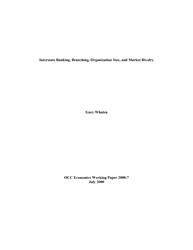 The 1994 Reigle-Neal Act gave multistate bank holding companies the option to convert to an interstate branch bank structure by authorizing the merger of bank subsidiaries across state lines. Over the following five year period, an increasing number of banking companies, including a number of very large ones, have done so. As a result, large companies operating through interstate branches have come to account for a significant share of deposits in many local markets and relatively little research has focused specifically on the competitive effects of this trend. This is a potentially important issue because the performance and competitive effects of large, multistate branch banks could differ from those associated with the operation of separately incorporated bank subsidiaries by multibank holding companies.

In this study, measures of competitive rivalry are constructed using Summary of Deposit data for all urban (MSA) markets in the U.S. for each year over the 1995-1999 period. Tobit models are estimated using the data pooled over the entire period to determine whether and how alternative measures of the extent to which multistate banking companies operate in the market influence the rivalry variables. The aim of the analysis is to determine if the results are sensitive to the size of multistate companies, the location of the market (home state vs. out-of-state), or the organizational form used by nonlocal competitors (interstate branches vs. bank subsidiaries). The results show a positive relationship between large multistate multibank holding company (MSMBHC) deposit share and rivalry when a simple linear specification is used. Adding a concentration-MSMBHC share interaction term to the equation reveals that the positive effect of MSMBHC share on rivalry rises with market concentration. This result is largely attributable to the behavior of MSMBHCs operating outside their home state. When the separate effects of interstate branches and out-of-state bank subs are examined, only the former is found to be significantly related to rivalry. And in these equations, the pattern of the estimated coefficients on the aggregate interstate branch deposit share variables is the same as that seen in the other equations (a positive coefficient in the absence of the interaction term, and a positive coefficient on the interaction term when it is included). These results do not change, and in fact, are typically stronger when the deposit shares are calculated using only large multistate holding companies. They also do not change greatly when markets where the identity of the top-tier firms changed are excluded or when random-effects Tobit specifications are used.