Foreign-Owned Banks in the U.S.: Earning Market Share or Buying It? (WP 95-2) 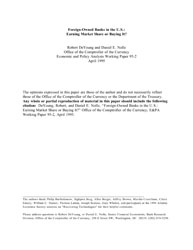 This paper seeks to explain why U.S. subsidiaries of foreign banks earned such low profits during the past decade, while at the same time making dramatic gains in U.S. market share. We estimate profit efficiency for a panel of U.S.-owned and foreign-owned U.S. banks between 1985 and 1990, using a modified version of the profit efficiency model introduced by Berger, Hancock, and Humphrey (1993) that is less sensitive to asset size, measures a greater percentage of bank output, and controls for portfolio and financial risk.

We find that foreign-owned banks were significantly less profit-efficient than U.S.-owned banks, a result that was driven almost entirely by poor input efficiency. In particular, given their production levels, their fixed inputs, and the prices they faced, foreign-owned banks relied more on expensive purchased funds than did U.S.-owned banks. The results suggest that foreign banks traded profits during the late 1980s in exchange for fast growth and increased market share.