The recipe for preservation success is the combination of policy innovation, mission, and low-cost financing. Often the need for preservation emerges when a private owner decides to sell a property or convert the property to market-rate housing. National, regional, and community banks can play essential and profitable roles in housing preservation.

Today, the nation faces a rental housing affordability crisis, as rent levels climb faster than median household incomes. Housing units considered "affordable" are those units with rents equal to or less than 30 percent of households' incomes. In 2014, however, more than 26 percent of all renter households nationwide paid more than 50 percent of their incomes for housing.1 Further, 66 of every 100 units that low-income renters can afford are either inadequate or unavailable to them.2 A large percentage of the units affordable to low-income renters are leased to higher-income households, and low-income households often are left with no alternative but to lease units with affordable rents that fail to meet physical standards for decent, safe, and sanitary housing. This situation has seriously challenged the lowest-income households.

In the United States, a person would have to earn $19.35 per hour and work 40 hours a week for 52 weeks a year to afford the average rent for a two-bedroom unit. This national average is more than 250 percent of the federal minimum wage and
52 percent higher than it was in 2000.3 Meanwhile, the loss of affordable multifamily rental units has resulted in fewer households receiving housing assistance compared with those eligible for it.

Congressional funding to subsidize rent for the lowest-income households has not kept pace with need. Despite a 16.4 percent increase in the number of very low-income households, from 15.9 million in 2007 to 18.5 million in 2013, funding for
U.S. Department of Housing and Urban Development (HUD) rental assistance remains below 2008 levels when adjusted for inflation. Just over one in four (26 percent) eligible households received assistance in 2013.4

As stated earlier, the volume of affordable rental units does not meet the demand for households whose incomes have not kept pace with the rising cost of market-rate housing. With declining public sector subsidies and rising development costs, preserving the existing stock of affordable housing has become more urgent than ever. Between 2015 and 2025, 2.2 million privately owned, federally assisted apartments will lose their affordability restrictions, at which point the property owners can convert these units to market rents.5

Nearly 60 percent of the rentals with expiring subsidies are low-income housing tax credit (LIHTC or housing tax credit) units. In many cases, these units can be retained in the affordable housing inventory if the property receives other subsidies with affordability restrictions or the owner obtains a new allocation of LIHTCs to fund capital improvements.6

Apartments subsidized with HUD's project-based rental assistance (PBRA) account for more than a quarter of the subsidized rental housing stock that is approaching the end of its affordable-use period. Properties with PBRA house over 1.2 million low-income households and are a critical source of affordable housing in many communities. PBRA properties are in privately owned developments with rents subsidized under federal contracts. Once those contracts expire, property owners can opt out and raise rents. More than 446,000 (33 percent) of the approximately 1.34 million active PBRA units are at risk of losing their affordability status.7

Owners with developments in high-rent neighborhoods earning below-market rents for their assisted units have the most incentive to opt out. This pressure is greatest in coastal markets experiencing gentrification, including neighborhoods in New York City, San Francisco, Calif., and Washington, D.C. In these high-priced markets, as well as certain second-tier cities all over the United States, confidence in the multifamily rental market places pressure on property owners to opt out of federal rental assistance and convert their properties to luxury apartments or condominiums.

The aging of the nation's public housing stock is also a concern, because more than half of the units were built before 1970. Public housing authorities need a staggering $26 billion to finance capital replacements and improvements. Preserving small multifamily rental housing helps meet some affordable housing needs. Apartments in older, smaller multifamily buildings are typically less expensive than rentals in large multifamily buildings.8 More than a third (38 percent) of apartments in buildings with two to four units rent for less than $600 a month. These properties tend to be older, and because of their age, a high percentage are in poor condition. Preservation and recapitalization of these smaller buildings will help prevent further loss of needed affordable housing.

Preserving affordable housing is the obvious first step in addressing our nation's affordable rental housing crisis for the following reasons:

How Can Banks Support Housing Preservation?

Lenders play a critical role in affordable housing preservation, and banks' investments in the projects located in their assessment areas or the broader statewide or regional areas that include their assessment areas can receive Community Reinvestment Act (CRA) consideration during examinations. Banks can participate in the following ways.

Both banks and nonprofit developers would benefit if they shared in this risk. Banks could agree to provide predevelopment dollars for a particular project, matched in part by nonprofit developers, in exchange for more substantial or longer-term participation in permanent future financing of projects. Lenders' more substantial roles might include direct purchase of tax-exempt bonds or housing tax credits, or providing construction loans.

For example, the National Housing Trust Community Development Fund (NHTCDF) is a flexible source of predevelopment and interim development funds for mission-aligned development organizations working to purchase, rehabilitate, and preserve affordable housing. The NHTCDF has made more than $35 million in loans in 28 states and Washington, D.C., to preserve over 11,000 homes. These loans have leveraged more than $1 billion of private and public financing to fund affordable housing preservation. The NHTCDF recently launched a new product for energy retrofits and renewable energy. Major investors in the NHTCDF include Bank of America, PNC Bank, E*Trade, Trinity Health, the Novogradac Rivers Foundation, the S. Clement Swisher Trust, TD Bank, and Wells Fargo, as well as the U.S. Department of the Treasury's CDFI Fund.

Many banks invest in LIHTC projects to acquire and renovate existing multifamily housing. The same lender that provides the bridge and take-out financing can invest in the LIHTC project and purchase a property's housing tax credits. Recently, 48 percent of all LIHTCs allocated went to preservation projects. By investing in housing projects in jurisdictions that prioritize the use of LIHTCs for preservation projects with expiring subsidies or use restrictions, banks support critical preservation activity. LIHTCs are the investment vehicle of choice for multi-investor funds in which community and regional banks invest.

Preserving naturally occurring affordable housing by sponsoring a real estate investment trust (REIT). A REIT is an investment vehicle created by Congress in 1960 to provide a means for small-scale investors to invest in income-producing commercial, industrial, and residential real estate. Some REITs purchase or develop properties directly, some acquire equity positions in properties, some offer private debt, and some pursue a blended approach, combining debt and equity investments with direct development.

Lenders can help preserve naturally occurring affordable housing by sponsoring a mission-driven REIT. These REITs allow affordable housing developers to compete for unsubsidized properties with market-rate buyers by providing a single source of capital that can be quickly deployed and used for the entire purchase. For example, the Housing Partnership Equity Trust (HPET) was formed as a social-purpose REIT sponsored by the Housing Partnership Network, a business collaborative of housing and community development nonprofit groups. The HPET provides a source of long-term, low-cost capital, enabling its 12 mission-driven nonprofit partners to quickly and efficiently acquire so-called "naturally occurring" affordable properties.10 The NHT/Enterprise Preservation Corporation is one of HPET's 14 nonprofit members. To date, HPET has raised $85 million in equity and has used it to purchase 11 properties in six states, totaling 2,605 homes.11

NHT/Enterprise, in partnership with Homes for America, acquired the Bradford Apartments, a 418-unit unsubsidized apartment community in Hagerstown, Md. The property provides affordable housing to a workforce population and very low-income households. All necessary funding was provided by the HPET, which layered debt and equity returns into a single product that allowed NHT/Enterprise and Homes for America to quickly purchase and preserve the property.

The Community Development Trust (CDT) is another mission-oriented REIT that provides financing for the production and preservation of subsidized affordable housing. The CDT works with local and national partners to make long-term equity investments and originates and purchases long-term mortgages that support the development and preservation of affordable housing for low-to-moderate-income families. The CDT seeks a market return, depending on the location. As a long-term investor, the CDT looks for opportunities that generate a consistent return as the basis for paying its investors. In addition to supplying the capital needed to restructure a property's ownership, address capital needs, and replace major systems, the CDT provides such amenities as recreational facilities and community centers. The CDT has invested more than $1.2 billion of debt and equity capital in properties in 44 states, creating or preserving over 40,000 units while earning a market-based yield for institutional investors.

Preserving naturally occurring affordable housing with debt products. The NHTCDF is working with several banks to develop a multifamily loan product that would provide a single fixed-rate loan with loan-to-value ratios of up to 95 percent by using bank funds for the first 70 percent and its own funds for 25 percent. The remaining 5 percent would come from the developer's own equity. The basic structure would be similar to the HPET structure in that it would allow a developer to quickly purchase a property by avoiding the need for multiple layers of financing. Banks can work with CDFIs to make investments with similar structures.

As the nation confronts a growing rental housing affordability crisis, banks have the opportunity to tap a steady source of revenue and earn positive CRA consideration by participating in efforts to safeguard hundreds of thousands of affordable units that serve as the foundation of vibrant communities. 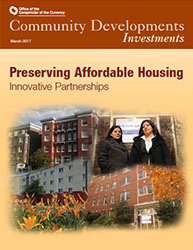 For questions or comments, call (202) 649-6420 or email communityaffairs@occ.treas.gov. This and previous editions are available on the OCC's website at www.occ.gov.

Disclaimer
Articles by non-OCC authors represent the authors' own views and not necessarily the views of the OCC.